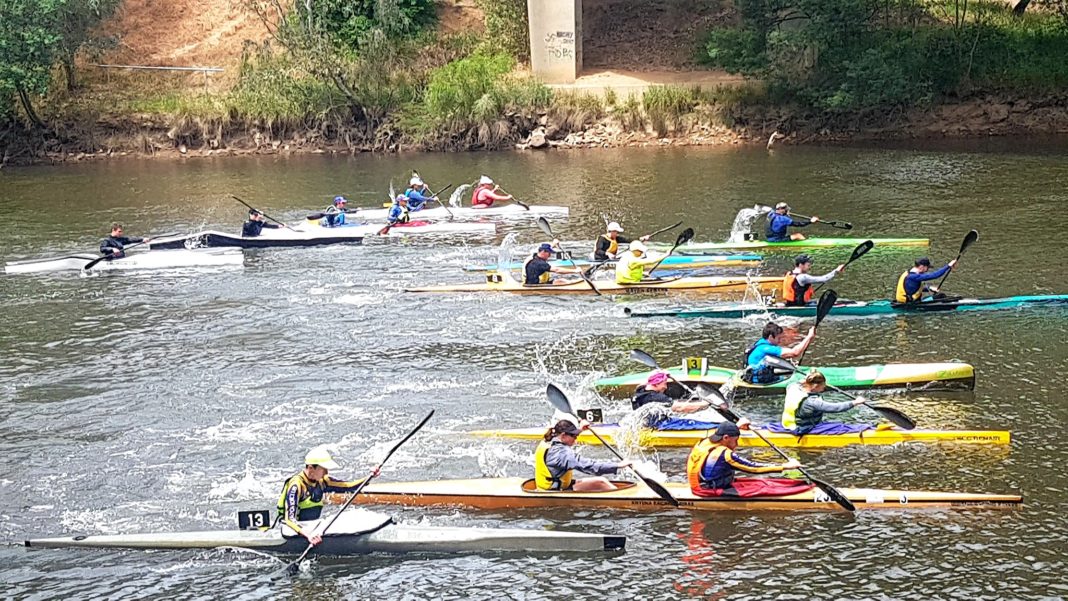 Well the Tour de Goulburn certainly lived up to its challenging reputation, the river was low (1.09, with 1200 Meg) exposing much more whitewater and the weather was cold and chilly (15 d).

EVERYBODY who raced paddled or helped need to be commended and thanked.

The Goulburn Classic is Australia’s oldest canoe race. It was originally 100 miles non-stop with heroic stories of paddlers negotiating the fast flowing river at night. In the 90s the race morphed into the Tour De bloody Goulburn, a tour that used 3 stages to highlight the beauty of the Goulburn River.

46 hardy paddlers ( up from last year), in k2s, tk2s, skis, canoes, k1s, WW boats, and sea kayaks took on the challenge on the mighty Goulburn river for 3 races over the day was to find the overall Goulburn Classic winners.

The safety guys were kept busy with plenty of swimmers and reports of some doing 360s down the gravel races.

The chance of winning a ZRE paddle (Paddle & Portage Canoes) and spot prizes plus the awesome free morning tea kept the paddlers going.

Stage 2 was from Trawool Bridge to Goulburn Park Seymour (17km)

The yellow jersey was awarded at the end of each stage.

The times were generally slower than last year (up to 1 hour) apart from John Young and Dominic Scarfe in a K2,( similar time  to2018) getting fastest time on each stage and also winning the yellow Jersey.

Congratulations. They have just returned from racing worlds in China.

The winner of the ZRE paddle was Emma Flowers.

Special thanks go to Paddle & Portage Canoes, Canoes Plus, Wes Hurray (E2A) and the all the Bendigo crew who put on the free morning tea and assisted in running the event.

A few years ago, our goal was to bring back some great river races to make up an informal south eastern series with other events  and the next event we will be running is the Mitta festival of Paddling in mid  December .