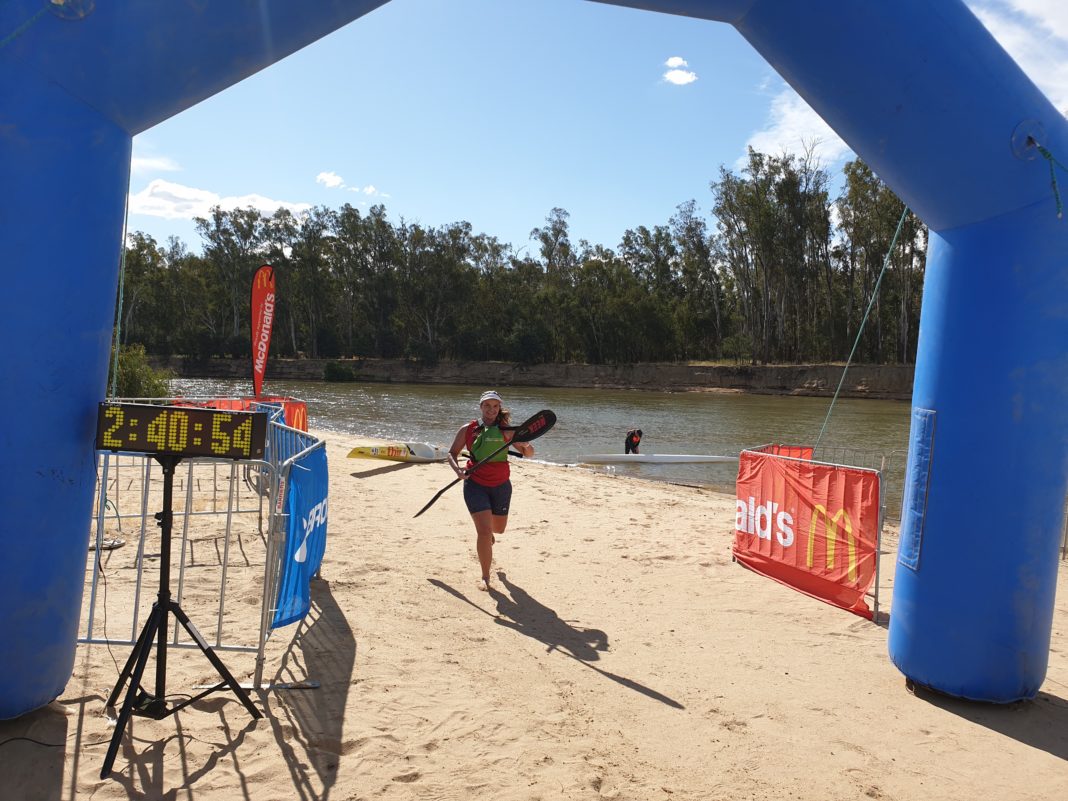 Another year, another Murray quad. See below for this years report from the Murray quad event.

The 2019 Murray Quad attached a large variety of participants with various skill levels from Australian champion paddlers returning from the overseas events to local kids enjoying a run along the Lake Mulwala foreshore. Saturday afternoon paddlers launched from Thompson Beach Cobram down the Murray River to Tocumwal in all sorts of water crafts including super slim racing kayaks, SUPs and a quad skull rowing boat as well ad sit on top fishing kayaks. First person to complete the 25km journey down the river was Bec Mann from Bendigo who has just returned from the Canoe Marathon world championships in China, Bec superior flat water paddling experience allowed her to pull away in the last half of the race from South African ocean paddler Jordan Clauson to win by 5 minutes in a time of 1 hour and 47 minutes, this was a full hour and 20 minutes before the sit on top kayaks arrived at the fish line.

The Yarrawonga Mulwala Amateur Canoe Club was well represented with a number of their members doing their first race and local paddling mentor Brea Roadley making the trip back to the Murray to compete finishing 2nd in female race. Club juniors Kristi Hardman and Zoe Schweda paddler with their mother to finished 2nd and 3rd in the team boat category behind the quad skull from Bendigo, other juniors Xavier Watson and Natalie Drew Cole paddling in their first race both one there events for the half distance race. While first time racers Andrew White finishing 5th for the full distance in a time of 2:19.21 and Tammy Watson in 4th place in the Half Distance race

This year the Murray Quad added a 40km time trial Spin session at Balance Spin Studio so this event added to the 25km paddle and Half marathon formed the Murray Dry Tri. That was taken out by 54 year old Ralph Wright from Ocean Grove who has competed in all the previous Murray Quads. Ralph set up a 40 minute lead in the paddle that made it hard for the others competitors to real him in the spin and run legs. In true spirit of the event Ralph donated his winnings to the event charity partner HeartKids enabling the event to reach its goal of raising $1000 for the charity. The spin only events was a tight battle between Barooga Sporties gym instructor Ian Davidson and local Clifford Nguyen with less than a minute separating them, Ian’s road cycling back ground giving him the edge to finish the 40km in 1 hour and 3 minutes, the fastest female was Pene Wood who was backing up from the quad skull in a time of 1hour 13 min in front of Brea Roadley and Tammy Watson who also paddled prior to the spin.

Sunday the focus turned to the Running of the Black Bull Festival, with highlight been the Q around the full 18 holes of the Black Bull Golf course, the male event was hotly contested race with a major prize up for graps for the both half marathon and quarter marathon this lead to sprint to the line at the half way make of the half marathon in the male race local running coach Cam Wood held off 2019 4 peaks winner Phillip Bellingham from My Beauty to win by 4 seconds, but Cam had used all his reserves and Phillip went on to win the half marathon by 2 and half minutes in a time of 1hr and 23 minutes. The female Q was taken out by Murray Quad Run ambassador Barooga’s Brooke Williams in respectable time of 48 mins 2 minutes in front of the half marathon winner Clare Hagan who went on to complete the race in a time off 1 hour and 43 minutes. The fun walk/Run events had a large local representation with notably performance by junior runner Jordan Ibbotts and Jackson White leading the charge in the Back Nine race and the Balance Sunrunners and Cobram Parkrun making up the majority of the field the 1.85km Maccas HeartKids Fun Run sore plenty of families involved all raising awareness and money for HeartKids with Summer Ibbotts and Will winning the race home and all participants receiving a prize packs thanks to Yarrawonga McDonald’s

All Prizes for the eve