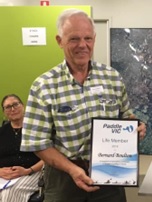 We regret to inform you of the passing of one of our long serving life members – Bernard Boulton of Kirinari Kayak Club.

Bernard has been a cornerstone of the Kirinari Kayak Club since joining as a member around 1983. In Bernard’s time with the club Bernard has helped to mentor and encourage club members through his passion for both the club and sport and for countless years helped to guide the club on the committee, holding the role of Secretary, and only recently vacating the position for another member to take over the role.

Bernard also worked out in the community as a kayak and canoe guide running programs for Paddle Victoria after retiring from his own business.  Bernard brought his enthusiasm and passion for paddling to the role and was a great asset to the Paddle Victoria Education department.

I as with many of you I am sure, have fond memories of spending time on and off the river with Bernie.
Our thoughts and prayers go out to Dallas (Bernard’s wife), Sandra, Julie and David (Bernard’s children), grandchildren and extended family in this time of grief.

Bernard’s family have asked for time to come to terms with the loss of Bernard, and for people not to contact whilst they grieve.

There will be a celebration of Bernard Boulton’ life held at the Warrandyte Community Church, 57 Yarra St, Warrandyte at 11am this Friday 18th November for those who wish to attend.

There has also been a wish for any gifts to be presented in the form of a donation to Asbestos Disease Research which the club will be organising. ABOUT US
Paddle Victoria are committed to providing our members and Victorians with a wide range of opportunities to safely participate paddling by offering services in four key areas of paddling – Competition, Recreation, Education and Experiences.
© Paddle Victoria Paddle Victoria acknowledges the Yorta Yorta peoples, the Wotjobaluk, Jaadwa, Jadawadjali, Wergaia and Jupagulk peoples of the Wimmera, the Gunditjmara Peoples, the Gunaikurnai people and the Gunditjmaraand Eastern Maar peoples as the traditional owners of this land. We pay our respects to elders past, present and Emerging. Always was, Always will be, Aboriginal Land.